Start a Wiki
Cookie Monster is a blue monster with a voracious appetite and one of the main characters on Sesame Street. Covered with blue fur and 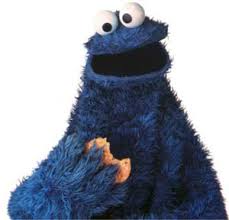 possessing a pair of googly eyes, Cookie Monster has an insatiable appetite. As his name implies, his primary craving is cookies, but he can (and often does) consume anything and everything, from apples and pie to letters, flatware, and hubcaps. When Cookie Monster eats something, he makes a very distinct, loud munching "noise", often interpreted as "OMM-nom-nom-nom..."

Cookie Monster has a deep, growly voice, and generally speaks with simplistic diction, saying everything with "me" - for instance, "Me want cookie!", as opposed to "I want a cookie!" (though in early seasons, Cookie spoke the other way around, and only occasionally would "me" slip in). Cookie occasionally displays an unexpectedly complex vocabulary, however, and is at his most gentrified when in his Alistair Cookie persona, hosting Monsterpiece Theater.

Jim Henson's Designs and Doodles explains Cookie Monster's early life: "In 1966, Henson drew three monsters who appeared in a General Foods commercial that featured three crunchy snack foods: Wheels, Crowns and Flutes. Each snack was represented by a different monster. The Wheel-Stealer was a short, fuzzy monster with wonky eyes and sharply pointed teeth. The Flute-Snatcher was a speed demon with a long, sharp nose and windblown hair. The Crown-Grabber was a hulk of a monster with a Boris Karloff accent and teeth that resembled giant knitting needles.

"These monsters had insatiable appetites for the snack foods they were named after. Each time the Muppet narrator, a human-looking fellow, fixes himself a tray of Wheels, Flutes and Crowns, they disappear before he can eat them. One by one, the monsters sneak in and zoom away with the snacks. Frustrated and peckish, the narrator warns viewers that these pesky monsters could be disguised as someone in your own home, at which point the monsters briefly turn into people and then dissolve back to monsters again."

As it turns out, the commercial was never aired — but all three monsters had a future in the Muppet cast. The Crown-Grabber was used in an Ed Sullivan Show sketch, in which he ruins a girl's beautiful day. Known from then on as the Beautiful Day Monster, he made a number of appearances on Sesame Street and The Muppet Show. The Flute-Snatcher turned into Snake Frackle, a background monster from The Great Santa Claus Switch and The Muppet Show.

And then there's the Wheel-Stealer, who was destined for greater things.

In 1967, Henson used the Wheel-Stealer puppet for an IBM training film called "The Coffee Break Machine." In the sketch, the monster devoured a complex machine as the machine described its purpose and construction. His greed gets the better of him, however, as the machine's recording continues (within his stomach), announcing that it is wired to self-destruct. The monster promptly explodes. This sketch was also performed in October 1967 on The Ed Sullivan Show.

Two years later, a similar-looking puppet (sans teeth) was used for three commercials selling Munchos, a Frito-Lay potato chip. This time, the monster was called Arnold. After the three ads were produced, Henson had the opportunity to renew the contract. He chose not to, because at that point he was working on Sesame Street -- and that monster puppet was moving on to the next stage in his career.

The monster gained his signature blue fur when he first appeared on Sesame Street as a generic unnamed character with an undefined personality. Early on in the show's first season, he often played the role of a toddler who got in the way of everything without thinking, acting fussy when he didn't get his way, and was scolded whenever he ate Kermit's property during lectures. Ironically, in these early appearances, Cookie seemed somewhat scary to younger viewers, as he personified the childhood fear of "being eaten by a monster."

A defining moment in Cookie's evolution was a skit written by then head-writer Jeff Moss, in which the googly-eyed monster kept nipping at Ernie's milk and cookie. Another breakthrough, according to Jon Stone, was a game show sketch where the winning contestant (who was actually a different furry blue monster) chose a cookie over other luxurious prizes. Ultimately, this craving would be fully integrated into his character (and his name) by the second season. With that, Cookie Monster quickly became one of the most popular and beloved characters on the show. Cookie Monster's theme song, "C is for Cookie," is one of the most famous songs from Sesame Street.

In Sesame Street Magazine issue 144 (May 1985), CTW's associate research director Istar Schwager allayed the fears of some parents about Cookie Monster's bad habits: "Each of the characters on Sesame Street is designed to exaggerate a familiar human foible, and Cookie Monster is babyishness personified... When parents object to Cookie Monster's grammar, we remind them that children learn from a variety of sources -- including other Sesame Street characters who speak properly. Cookie's eating habits, too, are a point of concern for some parents. The inedible things that Cookie eats (a car fender!) make it clear to children that his behavior is out of the ordinary. Other characters, such as Captain Vegetable, of course, are vocal advocates of good eating habits."

Arlene Sherman recalled in a 1998 Museum of Television and Radio seminar; "We used to have a typist that corrected Cookie Monster's grammar!"

When Sesame Street's format changed in 2002, Cookie Monster hosted a regular segment called "Letter of the Day." In each episode he is presented with a cookie, upon which is written the letter of the day, in icing (and later, actual foam letters). Despite his best intentions, and various implausible schemes, he always succumbs to temptation.

To counter concerns that the character encourages poor eating habits, a number of "Healthy Habits for Life" segments and plotlines were introduced in Season 36, in which Cookie encourages viewers to eat a balanced diet, and enjoy cookies as a "sometimes food." However, the idea of Cookie Monster setting a good example for children with respect to their eating habits has been used since the 1970s, with public service announcements and individual sketches (most notably the rap spoof "Healthy Food").

However, the move toward highlighting healthy eating habits in 2005 led to a persistent rumor circulating in the media and on the internet that Cookie Monster would be dropped from the show, or renamed "Veggie Monster." Sesame Street poked fun at the media firestorm in a Season 37 episode. In a sketch in a 2006 episode, Matt Lauer of The Today Show confronts Cookie Monster about the rumors that he's giving up cookies and becoming a "Fruit Monster." Cookie Monster refutes the rumor, explaining that he eats the fruit first, and then has cookies for dessert. Cookie Monster also says that the media is always blowing things out of proportion. (See Is Cookie Monster now the Veggie Monster? for more.)

In an interview with NPR, Cookie Monster explained he eats everything, demonstrating by eating his headset and a plate of broccoli. However, upon being served sardine ice cream, he says he draws the line at sardine ice cream. In a later interview, he added that he also drew the line at eating bugs.

Currently, Cookie Monster stars in a series of segments called Cookie's Crumby Pictures, where he spoofs various movies. Cookie also appears in The Furchester Hotel where he is the head waiter.

Retrieved from "https://everything-in-the-character-universe.fandom.com/wiki/Cookie_Monster?oldid=4243"
Community content is available under CC-BY-SA unless otherwise noted.